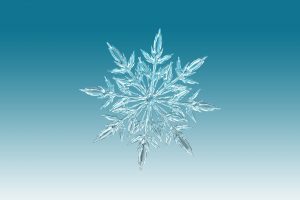 ‘Tell me, what is the weight of one single snowflake?’ asked the stoat to a dove.

‘Nothing more than nothing’ was the answer of the dove.

‘Well, in that case, I have to tell you a miraculously story’, said the stoat. ‘One day I was sitting on a branch of a pine tree, when it still and softly started to snow. Because there was nothing else to do, I started to count the snowflakes that were softly fluttering down on the branch I was sitting on. I was exactly at number  3.471.265, when the 3.471.266th  snowflake fell on the branch,.. Nothing more than nothing you say, but the branch broke.’

And the stoat continued his way.

The dove, since the time of Noah an authority  in the matters of peace, thought about the story and said to himself.

‘Maybe, just maybe, we are lacking the voice of one person to bring peace into the world.’

This website uses cookies to improve your experience while you navigate through the website. Out of these, the cookies that are categorized as necessary are stored on your browser as they are essential for the working of basic functionalities of the website. We also use third-party cookies that help us analyze and understand how you use this website. These cookies will be stored in your browser only with your consent. You also have the option to opt-out of these cookies. But opting out of some of these cookies may affect your browsing experience.
Necessary Altijd ingeschakeld
Necessary cookies are absolutely essential for the website to function properly. This category only includes cookies that ensures basic functionalities and security features of the website. These cookies do not store any personal information.
Non-necessary
Any cookies that may not be particularly necessary for the website to function and is used specifically to collect user personal data via analytics, ads, other embedded contents are termed as non-necessary cookies. It is mandatory to procure user consent prior to running these cookies on your website.
OPSLAAN & ACCEPTEREN